A Most Experienced Kidney Patient

​(from the Spring 2014 Kidney Konnections newsletter) 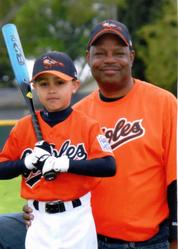 This is a story about Phil Wyche, a longtime member of the Bay Area Association of Kidney Patients (BAAKP) and a member of the Board of Directors since 2008.  Phil was notified in 1998 that he had high blood pressure (HBP), and he knew that HBP was common in his family, so he knew the future was not good.  He admits he wasn't a cooperative patient, then ignoring the doctors’ advice and took his blood pressure medicine infrequently.  In 1999, his GP sent Phil to a Kaiser Nephrologist because his creatinine was rising. Phil admits he remained very “stubborn,” felt he was in good shape and was not careful about taking his medications regularly. He also did not want to make time for doctors’ appointments.

In 2001, Phil’s Nephrologist, Dr. Feldman, encouraged Phil to start looking for a kidney transplant donor from his family. (Advice, which again he ignored.)  Phil didn’t want to discontinue his job or participating in his favorite sports, basketball, and softball. Phil worked for many years in a pharmacy and witnessed patients who came in year after year with kidney disease but had ignored the medical professionals.  Despite this exposure to kidney disease  for 7 years, Phil continued to deny by thought and action that his kidneys would fail.

At one point in 2008, during a softball game, he realized he was bone-tired, felt horrible and had no strength.  He went to his nephrologist, Dr. Feldman, and from that visit learned that must start dialysis “right away.”  Within hours, a perm catheter was inserted in the chest area, and Phil started Hemodialysis at Satellite Healthcare in Redwood City. Later, Phil had a “fistula” inserted into his arm; upon healing (several weeks), the perm catheter was removed.

Two years after starting hemodialysis, he hurt his back while working in the yard.  The doctor sent him to physical therapy and prescribed a transdermal patch with pain medication. Phil didn’t like the way the medication affected him and, despite his knowledge of the damage that NSAIDS (Non-Steroidal Anti-Inflammatory Drugs) could cause to kidneys, took Aleve, because it was the only thing that would relieve the pain. (NSAIDS are not recommended for a kidney patient!)

After 3 years, Phil was becoming very fatigued on hemodialysis and the 3 days a week schedule took time away from family & his job. He transitioned to a different form of dialysis, known as peritoneal dialysis; a variation called Continuous Ambulatory Peritoneal Dialysis (CAPD) with changes 5 times a day. The transition was great; Phil started feeling better and was able to spend more time with family, friends and CAPD made travel less complicated. However, because of the 5 times daily exchanges, Phil decided to retire from work until the happy day that he would finally receive a kidney transplant.

Then, in 2010, another setback occurred.  Phil developed nausea and was unable to digest any solid food, which led to diagnosis of carcinoid cancer in the lower portion of his stomach. Phil was treated surgically and had a full recovery.  However, Phil was then told, because of the cancer, he would be placed on the inactive list for transplantation and had to wait for three years before becoming “activated“ again. For Phil, this was just one more roadblock.  He was devastated by this bad news, and he felt he would never receive a transplant.

The prospect of a transplant was fading farther and farther away, and in the following year, he developed a bleeding ulcer and needed more surgery. Once again, another setback!

However, in June 2012, with the encouragement of his nephrologist, the UCSF transplant team called and scheduled him for a stress test, x rays, heart test, and other tests to have current and updated information.  Still no transplant in 2012; it had been eight years on the waiting list.

June 2013, the dialysis center gave him a routine shingles vaccination, and Phil subsequently learned from the UCSF transplant team that because of the live virus injection, he would be taken off the transplant list, made inactive again for 90 days.  What else could happen?

Then it hit him-that nothing was going right, and the prospect of getting a transplant became less with each passing day. The nephrologist encouraged Phil to talk to someone about this worsening depression. After talking with a professional health care worker, Phil became more organized in his thoughts and developed a renewed sense of purpose. For the first time, he began to advocate for himself.  As a BAAKP Board member, he was a champion for others, but he now realized he needed to be his own champion. He realized he had been holding himself back by not being persistent in his quest for a transplant.

For the next few months, Phil began to advocate more regularly with his contacts at UCSF, pushing for a transplant.  He then received word that his Case Manager (Pre-transplant coordinator) was leaving UCSF and the prospect of any more delays was unsettling. There would be a 2 to 3-week gap before the new coordinator would be ready to go.  With the probability of more delays, Phil got on the phone again.

Within a few months, he got a call at 2 AM on Thanksgiving Day 2013 from UCSF with the positive news that they had a kidney for him.  (Babies and Kidneys seem to come in the middle of the night!) Within an hour, Phil was on his way to San Francisco!  His transplant took place at 3:00 in the afternoon on Thanksgiving Day, and he was home within 3 days.  His early release was due to the determination of both Phil and his wife, Kimberly. By the second day, he was walking around the hospital ward, and finally, he completed the one ½-mile loop requested by the nurses and completed the exercise of walking up a mock staircase. Miraculously, the pain was not a factor by the third day.

Through it all, Kimberly made sacrifices with time away from her job and family.  She has been an extraordinary caretaker and Phil’s biggest supporter.  Now, Phil and Kimberly are spending more quality time with their children and grandchildren.

Phil is not proud of his early history with kidney disease but is telling his story to those with high blood pressure and other medical problems, which could lead to kidney disease. He hopes that others can profit from his experiences.  Perhaps this story also will help someone to advocate for themselves and avoid a long and challenging medical history reminiscent of Phil’s.


UPDATE: Today, Phil is doing well with his transplant.  He is entering year number 6 and is back in all of his activities. Phil functions President of the Bay Area Association of Kidney Patients and also as Support Group Leader at Palo Alto, Oakland, and San Francisco.​

Phil Wyche and his son