UPDATE:  My kidney transplant was without any real complications.  During the first-year post-op, I felt so much better, and my blood test numbers were back to normal.   I was able to transfer my post-transplant care to Stanford Hospital & Clinics, which was closer to home.  The Stanford doctor immediately went through the routine of verifying the test results and found that my health was generally good.  He put me on a routine of infusions for the BK virus. (Note: the BK virus is present in 80% of the population; unless you are on immunosuppressants, it rarely causes trouble.)  I have been in good health since my transplant and do all of the routine maintenance and upkeep on my home and garden, which I have always enjoyed. I’m back to normal after a transplant at 78 and without having been on dialysis! Life is Good!

In November 2002, after a routine physical examination, my doctor told me that I had the signs of early stage kidney disease.  I did not ingest that statement other than to say, “What does that mean?”  In typical doctor-speak; he said, “your kidneys are diseased; it is early in its progression.”

With that short answer, I paid no attention to “kidney disease.”  My life went on without further concern.  My business occupied my time and for exercise,I was a three-times-a-week tennis player, I was doing just fine.  As I think back today, I was not playing as well as I had been, and I was getting tired before the end of the session. Also, my wife had a terminal illness: my attention was directed beyond that short warning.

In April 2006, I had a severe attack of itching all over my body.  I used several different “over the counter” creams but to no avail.  I then asked for an appointment with my doctor, after his examination he suggested that I see a nephrologist.  At an appointment with Dr. Feldman of Kaiser in Redwood City, he told me that my kidneys were severely diseased.  I was told to consider either dialysis or a transplant.  He then suggested that I should visit the dialysis center to see the process.  When visiting the dialysis center with his nurse, I said to her, “I don’tever want to go through this process.” 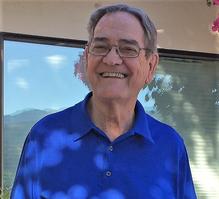 Dr. Feldman then suggested I meet with the transplant department at the University of California San Francisco. They said that the waiting time for a kidney was six years.  The exam did reveal that my health, other than the kidney disease, was in good condition for someone my age.   I was then advised to meet with a dietitian. I was told to follow a low protein, low salt ,and low potassium diet to give myself as much time as possible, hoping, of course, to get by during my six-year waiting period.

During the waiting period, I had my blood tested every month; my creatinine and potassium, as well as my GFR were monitored, along with several other tests.  In the meantime, Dr. Lin became my primary nephrologist.  LikeDr. Feldman, she called me with my test numbers every month. In August 2012 ,my six years of wait time had gone by and Dr. Lin, in her usual concerned manner contacted UCSF to schedule another appointment.

During the interview at UCSF, I met two nephrologists. Both told me that I could wait for possibly two more years because while not good, my numbers were stable.  I elected to take their advice after both doctors reassured me that I would remain at the top of their active list.  I went away satisfied that I was not in immediate danger.   I was asked to send a sample each time I had a blood draw, UCSF covered the FedEx mailing costs.

In August 2014, my test numbers declined further, my creatinine was above 5, and my GFR was 12.  Dr. Lin called her contacts at UCSF,and I was scheduled for an appointment the following week.  I was again told that I was at the top of their active list.  Several tests were then conducted through September, October, and November.  I was assured that when they had an available healthy kidney that matched my blood type, I would be notified.

Another doctor who worked in the nephrology department told me that it was their policy not to recommend a person who was over eighty years (80) of age for a transplant.  In my case, I would be turning seventy-nine (79) in March 2015, so I was close to that age limit.   I also had the experience of having a potential live donor being told that if he donated a kidney, his insurance would be canceled.  This was before the legislation we call “The Affordable Care Act.”

On December 23, 2014, I received a call from UCSF and advised to standby.  Later, after 9p.m. I was called and told that someone else had received that kidney.  I was not disappointed by that second call becauseI had not been overlooked.  I knew then that I would remain on their active list.

It was 11:15 pm on January 27, 2015, when I received “TheCall” and was told to be at the hospital within two hours.  At first, they couldn’t find me, but they had my new wife’s phone number, and she took the call. I received my new kidney the next morning.

Thanks to the first-class medical care I received from Kaiser and UCSF, I am a happy kidney recipient!