Vallejo residents James and Emelda Billbury have learned much along the way to a transplant and
they wish to share it with our readers.  In 2014, James (a VA patient) learned from an outside family doctor that he wassuffering from kidney disease. Then, returning to the VA, they told him he had a GFR of 30 and could see a dietitianin 3 weeks. Three weeks?

Three weeks later, his GFR was down to 19, and the Billburys didn’t know what to do! They were alarmed. Desperate, he found BAAKP and called our number (650-323-2225). Advised to get Risa Simons’s book, “Shift Your Fate: Life Changing Wisdom for Proactive Kidney Patients,” they were invited to come to the next meeting. James and Emelda became regulars at the BAAKP Educational presentations and Support Groups. They had a fortuitous encounter at one of the Support Group meetings with Faith Tootell, a well-known renal dietitian, who took James under her wing. She immediately referred them to a dietitian at WellBound in Vallejo; “Go now,” she said. James liked the proactivity of the BAAKP group vs. the passivity of the people at VA. He was advised to get his “numbers” (laboratory results) and bring them to the next BAAKP meeting.  Meanwhile, his VA nephrologist had offered James hemodialysis at VA Martinez, nothing else. This nephrologist gave James & Emelda the impression that they were “bothersome,” and the doctor seemed “dismissive.” James asked for a referral to Travis AFB. Still feeling lousy, but hopeful, he began to advocate for BAAKP and himself. James was constantly contacting the higher ups in the VA system -- through the VA MyHealth website emails and phone call after phone call.

At a BAAKP Educational Presentation, James met the local NxStage home hemodialysis representative.  From him, James learned that NxStage was not available through the VA at Travis Air Force Base. At that time, James learned that veterans who are eligible for VA care are also eligible for Department of Defense care (which has more funding) if you live near a military facility. When he was transferred to a new nephrologist at Travis AFB in Fairfield, he found a nephrologist there who was eager to help. James still wanted NxStage, which Travis VA did not offer. His new Nephrologist at Travis, working together with the social worker there, referred him to the VA in San Francisco.

Meanwhile, anxious to get a transplant through the VA, James went through the many tests which were to be submitted to the VA transplant center in Portland. Portland kept waiting for the “package” from the VA in Martinez. It didn’t happen because, as James learned, they did not have a transplant coordinator at that VA. After James complained, the package suddenly appeared in Portland!

Finally, the nephrology department at San Francisco VA contacted him. James forwarded the information about the VA transplant and WellBound, and the head Nephrologist directed that James be movedto “private sector” because the services James was requesting (NxStage) were not offered by the VA. (By law, James had to get the best treatment available, and the VA authorized his treatment with WellBound, and the VA would pay.) James finally succeeded in getting the NxStage home hemodialysis he wanted; dialyzing five nights a week enabled him to feel so much better.

Because he was now under “civilian care,” he was now eligiblefor a transplant at a non-VA hospital. The tests were all done at the VA, and California Pacific Medical Center (CPMC) Kidney Transplant Team acceptedthose VA tests. His interview at CPMC was in April 2016; and within the same month, he received a call from CPMC that he was scheduledfor surgery in May 2016. Astounding! James and  Emelda were in shock. One month! They were to be part of a transplant chain, where incompatible donors and recipients are matched. (An altruistic donor’s kidney is transplanted into a matched recipient who had a donor willing to give a kidney that was not a match and so on.) 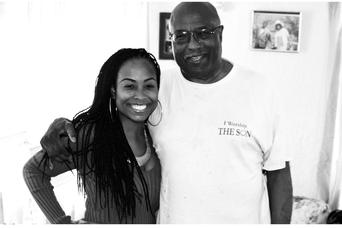 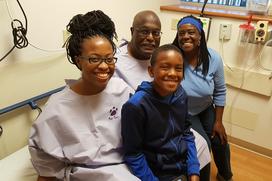 Fighting Their Way Through the VA System 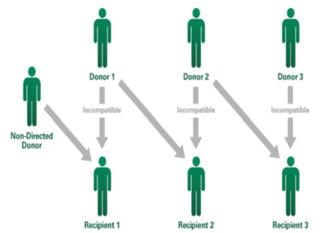 Daughter Regina and James with the family and ready for surgery

They learned that their 24-year old daughter Regina, who was a different blood type, was to be the donor. After much discussion and concern for their daughter, they decided to go ahead. The transplant chain consisted of four living donors and four recipients. One recipient was Alan Lapp;James and Alan met before surgery, not knowing that both were members of the BAAKP. It wasn’t until later, both realized they were part of the same kidney-support organization.  James was back at work in one month, manning the phones in the office; it was four months before he tackled the physical part of the job.

James credits his wife Emelda for helping him every step of the way, for being his right-hand and helping with the home hemodialysis. James also wants to thank the BAAKP volunteers for doing the great work to get information to patients who wouldnot have it otherwise. Without it, James feels
he would still be on in-center hemodialysis in Martinez and in bad shape. BAAKP cannot do the work for you; but as James and Emelda did, you can be proactive too, and “fight your way” through the system!

UPDATE:
James reports: Two years and six months. That's the elapsed time since my kidney transplant in May 2016. Normally I'm not a clock watcher, but this is different.  Since receiving the transplant, each month I would wait anxiously for the results of my lab work.

Monthly,  after receiving my lab results, I was a “bookie”, looking at my “numbers” very carefully. The waiting and anxiety over testing and numbers were quite disturbing. As each month passed, I learned to relax and accept the fact that I had been granted a better life after transplant.

I wish I could say that I kept my anxiety to myself, but of course, I involved my wife Emelda with every cough, sneeze, and headache imploring her to agree with me that obviously, these were the initial signs of rejection. Being her firm adoring self, she would assure me that my worries were pointless.

After six months, peace set in, and I began to enjoy myself. Now, post-transplant, the days, weeks, and months are more significant and valuable. I now enjoy myhobbies of photography and video and volunteerto do wedding shoots and birthdays.  I continue to work daily at my small business. My employees say “the old man is back”; that's music to my ears.

I thank God for my wife Emelda, who supports me every step of the way, and of course my youngest daughter Regina. Regina started the ball rolling.  She volunteered to become a living donor, in a four-way swap transplant at California Pacific Medical Center in San Francisco. Those doctors at CPMC are outstanding skilled professionals and very caring; I couldn't have chosen a better facility or team.