My name is Robert C. Neal, a recent kidney transplant recipient.  My kidney failure was induced by drug abuse, hypertension, and diabetes. When my wife passed away unexpectedly, it took me into a downward spiral since she always encouraged me to change my bad habits. My life depended on it. Little did I know my health was about to change dramatically.  In 1990 I was diagnosed with hypertension and diabetes. I was treated for both the high blood pressure (hypertension) and diabetes; however, my doctor failed to mention the possibility of kidney failure if I didn't control my blood pressure, lose some weight, and diet better. I never paid too much attention to my diet and weight gain because I was always a hefty child. I became a Chef (which didn't help because I enjoyed eating). I started working on losing weight and controlling my blood pressure atthe advice of family.

Bobby in the hospital after his transplant

My mother (and my best friend) who is 84 told me a few days before Christmas 2016 not to be surprised if they called me on Christmas day. It never occurred to me she would be right. On Christmas morning, I received a call from California Pacific Medical Transplant Team that a kidney was available for me. I assured them I was ready, and they advised me to enjoy my Christmas and report at 6:00 am December 27. I was overjoyed, nervous and scared.

I arrived at the CPMC at 5:30 a.m., no longer worried. I had just completed my last dialysis treatment when they took me to surgery for my new beginning.  The implanted kidney “woke up” right away and was functioning as expected.  However, during a routine examination on the 4th day, a hematoma was found. I was taken back to surgery to drain the hematoma.  After the fifth day, they noticed I was not putting out a significant amount of urine. After examination ,it was determined that one of the tubes was not fully connected to the kidney, and urine was seeping into my abdomen. By this time, I was tired, fearful, and began to lose hope—wondering if this was all worth it. But I was reminded that “if God brought you to it, he would bring you through it.” In a matter of 14 days, I had had three surgeries. I came home January 7, 2017, with a fully functional kidney.

It has been ten months since my transplant, and I haven’t felt this good in over thirty years. I am thankful for the love and support from my family and friends, CPMC transplant Team, Dr. Gottheiner, Dr. Hassoun, Dr. Garb, BAAKP, Iris Corina, and Vickie Martin. I couldn't have done it alone. I praise God for loving me despite my faults. 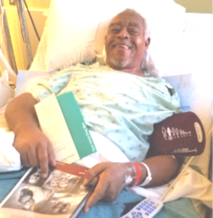 In 2013 my energy level was starting to decline, and I required to restoften. Never did I realize my kidneys were on the decline. After a routine doctor’s visit and blood work, I was informed of some news that had me worried beyond belief. The blood test indicated my creatinine level was slightly rising. I was placed on additional medication to keep my blood pressure down and to stabilize my creatinine.  Things started to change swiftly for me, and I was not prepared.

On a riding trip to Las Vegas with my motorcycle club, I began feeling a little strange, not sure if it was due to the ride and the heat. I had become lethargic and fatigued. After resting, I felt better. The next day, on the way back to the Bay Area, fellow bike members noticed that I was riding erratically, so I rode home in a car with friends. Later that evening when I awoke, my son noticed I was responding incoherently, so he called 911. When the paramedics arrived, they checked my blood sugar. It was 38, so I went to the ER. After I was stabilized and tests run, I was told it was possibly kidney failure. This was the first time I realized how serious my condition was. I was afraid because I wanted to live.

Shortly after the Las Vegas incident, and not feeling too comfortable with my current physician, a friend suggested I find a Nephrologist. I joined the Palo Alto Medical foundation Nephrology department under the care of Dr. Gottheiner. He began to educate me on preventative measures to avoid dialysis.

In 2014 my creatinine level rose above 7. I had a fistula inserted for dialysis. Several weeks later, I started in-center hemodialysis. The possibility of not doing dialysis was no longer an option. It was something I had to adjust to – because I had to do it. Meanwhile, my doctor’s office submitted my name to the UC Davis and California Pacific Medical transplant lists.

In 2016 while waiting for an appointment at PAMF, I noticed a BAAKP newsletter. I read an article about a kidney transplant patient I knew, Phillip Wyche. We were childhood friends since elementary school. I contacted Phil, who was a board member with the BAAKP, and he encouraged me to attend one of the support group sessions. After I attended several support group sessions, it gave me a renewed hope and a reality check that a transplant was possible.  The support group was very encouraging and positive.   At one of the BAAKP support group sessions, I met a transplant patient Iris Corina. She recommended I contact Vickie Martin a transplant team coordinator at California Pacific Medical Center. After the interview, I was qualified as a transplant candidate. Not promised, I was hopefulto hear something by year end 2016 (although my blood type waiting period was 6-8 yrs.). I was excited and optimistic about the possibility of receiving a transplant. I continued to be compliant with  my dialysis, weight, and diet.

UPDATE: It’s been almost two years since my transplant, and my quality of life  has returned to what it was before my kidney disease.  I’m working part-time as an Uber driver, and still doing some catering.   I also am working with the BAAKP as a board member.  I owe BAAKP a great deal of gratitude for the support they have given me. Today I can eat anything I chose, but I choose to eat a healthy diet and keep my blood sugar under control.

I’m riding my motorcycle again, walking 45-60 min three to four times a week, and I dance and have a good time at parties 1 to 2 times a month.  And I remain alcohol, tobacco, and drug-free. Life is awesome. 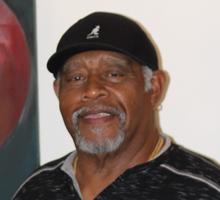