Anne Langer, as a Medical Lab Scientist, worked in the Stanford Labs for many years and knew much about lab results and diseases.  Her background was indeed fortunate, as her health would take her deeply into that world.  It was Type I diabetes that struck first when she became sick at the age of 23. She lost her mother and shortly after that developed an excessive thirst, excessive urination, loss of weight and exhaustion. She was diagnosed with Type I diabetes, an auto-immune disease, which Anne believes was caused by the stress of her Mother’s death.

She continued working but, was feeling sick, and was eventually (mis)diagnosed with Multiple Sclerosis (MS.)  She went on medical leave and was treatedfor MS with what she calls “horrible medications.” By the end of 2007, Her Primary Care Physician at Palo Alto Medical Foundation (PAMF) saw signs of kidney disease in her tests and referred her to Dr. Toby Gottheiner, a PAMF nephrologist.  Anne stresses that the kidney disease was not related to her type I Diabetes, but to the autoimmune disease, called ANCA vasculitis, which was diagnosedafter a biopsy.  (Vasculitis is an inflammation of the blood vessels; there are many types).

Because of her experiences with diabetes, Anne always believed in advocating for yourself. She noticed a poster in the nephrology waiting room at PAMF advertising a Bay Area Associationof Kidney Patients (BAAKP) meeting.  She started attending the support groups and learned about diet and how to reduce phosphorus, and when and how to get on the kidney transplant list.   Her kidneys limped along for seven years: she avoided dialysis by eating only 3 oz. of protein a day “the size of a deck of cards”  and cut out phosphorus-laden sodas.  When grocery shopping, she “checked every food label for phosphorus and any ingredient that had the word phosphorus in it. For example, phosphoric acid, tri-calcium phosphate, etc. If it had ‘phos’ in it, it went back on the shelf!”

She worked to get listed for a Stanford transplant, and then at the encouragement of someone at a support group meeting, also registered at UC Davis.  But, she knew that this couldn't go on; her kidneys were failing. And, thinking she would always get a transplant, Anne hadn’t prepared for dialysis.

At one of the BAAKP Educational Presentations, she heard a woman speak who had donated a kidney to her niece, resulting in a first-person book about the donation process (Belia Marina, A Gift Not Wasted).  Anne began to see the possibilities of a living donor.  (Since the first living donor transplant in 1954, there have been more than 50,000.)  Anne now had renewed hope.

She started with a simple message on Facebook, posting a cute graphic such as this one with the words “If you are considering giving the gift of Life, please contact StanfordLiving Donor Coordinator at 650.498.8382, and mention me.  No obligation, you're just asking for info."  She hoped that interested friends would call Stanford. And people did!

UPDATE: My friend's kidney moved to its new home on April 29, 2015.  "Mr. Bean" has brightened up the place with the promise of a healthier future.  It's been three and a half years since my non-related living kidney donor John generously shared his spare.  My hero has resumed playing golf and told me that his game is better than ever!  He continues training pilots on a simulator.  John continues to be very happy with his decision to save my life.  He encourages potential donors to learn all they can, then GoFor It!

My lab results remain terrific because I'm determined to take the best possible care of this amazing gift. The sparkle, laughter, enthusiasm, and joy have returned!  Even though I will always need to have my blood tested; it’s only every two months.  I've been able to get back to finding energy for many of my favorite things:  volunteering, walking, socializing, event planning, crafts, and travel.  One highlight was a Danube River Cruise (a kidney celebration) with my dear husband Jerry, donor John and his wife Diane, my best friend since we were nine years old.

Dear Kidney Patients,  Learn all you can!  BAAKP is an amazing resource for information and great support.   I am forever grateful to BAAKP,  my transplant team, and my donor.  They made it happen! 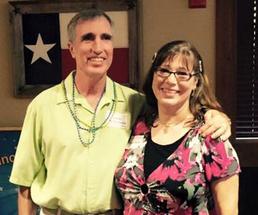 A high school friend drove from LA for testing, but for some unknown reason, that fell through. (The transplant centers never tell you why.)  Other people did callbut for some reason, did not progress to testing. Anne knew she needed a transplant soon, or she would have to start dialysis.  Fortunately, her husband’s insurance covered the costs of the tests on the possible donorsand even transportation.

And then along came John.  Anne reports that “John made it easy”!  John is the husband of Diane, her best high school friend who now lives in Oak Harbor, on Whidbey Island, Washington. He is a retired Naval Aviator who had bravely flown airplanes on and off aircraft carriers and was physically very fit.  He and his wife watched helplessly as Anne’s kidneys deteriorated from the diabetes and autoimmune diseases.  Diane had her blood tested, and it wasn’t a match, but John’s was!  And, after much testing at Stanford, John was approved as a donor. The surgery took place shortly afterward, performed by Stephan Busque, MD at Stanford.

Immediately, Diane and John noticed that Anne looked better; the color had returned to her previously pale face. “She had this glow about her.”  John said ,“I would do it again if I had three kidneys”. Anne Langer says her hero John is that kind of guy and he gave her confidence to proceed with the transplant. And, she just celebrated her 2-year “kidneyversary” in April.

Anne is grateful to have found the Bay Area Association of Kidney Patients and to learn about treatment options she had not considered. She encourages everyone to advocate for themselves and to learn as much as possible. 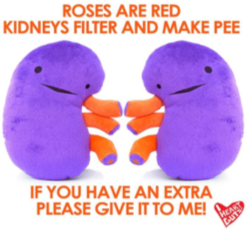